On Day 1 of joint practices between the Philadelphia Eagles and the Cleveland Browns, I would say the two teams played to a no decision. On Day 2, the practice was all about the red zone, and it was decisively won by the Birds. Let’s get to the practice notes.

• One of the matchups I was most looking forward to heading into Cleveland was Jordan Mailat vs. Myles Garrett, who is thought of by some as the best pass rusher in the NFL. Garrett didn’t practice on Thursday, but he did square off against Mailata twice in one-on-ones on Friday. I thought Mailata won both reps. Mailata thought they split them. Whatever. On the second of the two reps, Garrett tried a dip speed rush around the corner, but Mailata was able to guide Garrett up the field and away from the quarterback, and even used Garrett’s dip against him by putting him on the ground.

Later, in 11-on-11s, Mailata had a nice block on a zone read that allowed Boston Scott to run through a huge hole on the left side. Jeff Stoutland enthusiastically yelled, “That one goes on the tape!” (Translation: He’ll use that block as a teaching example for the other linemen.)

On Thursday, Lane Johnson said that Mailata was bummed that Garrett didn’t practice. He got his wish on Friday, and said that he planned on talking shop with Garrett after practice to pick his brain. He didn’t lie. 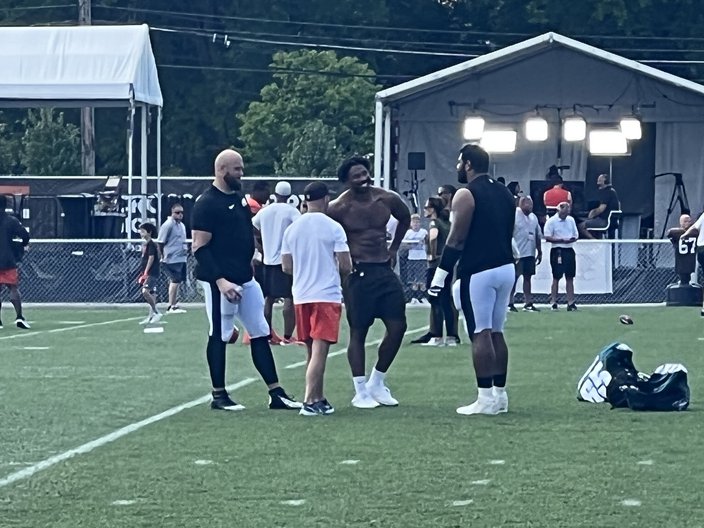 Mailata is huge and athletically gifted, but the reality is that he is a top left tackle in the NFL because he wants to be.

• Dallas Goedert continues to shine. He had a bunch of catches, and two particularly impressive plays today.

• Speaking of outmuscling defensive backs, AJ Brown and Greedy Williams both went up for a 50-50 ball in the end zone, and Brown simply ripped it away from Williams. The force of Brown’s rip sent Williams to the ground. Brown glanced down at Williams for a moment before heading off the field.

But I also believe that Hurts is beginning to figure out how to “throw guys open.” Defensive back’s head is turned the other way and you think you think you can fire it in before he can get his head around? Let it rip. The worst that can happen is an incompletion. Have a mismatch with Brown on a smaller corner on a slant? Let the big guy be a bully. Think Smith can outjump a corner down the sideline? Throw it up high. Is some linebacker trying to cover Goedert? Fire away.

Hurts verdict: We’ll see if Hurts actually does that with consistency in real games, but he was more than willing on Friday, with positive results. As a reminder, I should note that the Browns were without their top two corners, Denzel Ward and Greg Newsome, which might give a quarterback more confidence to make somewhat riskier throws, but I liked what I saw today. 📈

• Jalen Reagor caught passes in volume today. I’ve made this observation in past practice notes, but it bears repeating that Reagor is having the best camp of his career. Last year, he had a couple of outstanding catches that got posted on social media and went viral, but he otherwise did not have a good camp, as he was plagued by drops and other mistakes. This year, he has made the plays should make, but with consistency. If he remains on the team this season and he is not dealt, just consistently making the plays that are there is all they need him to do as the fifth receiver.

Also, Reagor has regularly been the first player up on punt returns throughout camp, ahead of Britain Covey.

• Josh Sweat looked like he had a huge day in 11-on-11s. The Eagles’ defense was on the far field, so it was a little difficult to see exactly what was happening, but it looked like he had at least two sacks, plus an additional two tackles for loss, and he was getting to the quarterback quickly. In other words, he was forcing the action, not benefiting because the play simply came to him.

• You probably saw Kyzir White intercepted a pass in the Eagles’ preseason game against the Jets. He had another pick today, and an additional near-pick when he jumped high for a pass over the middle and got a deflection. White seems to have good instincts in zone coverage.

• I hate to keep picking on Kenny Gainswell, but he had another drop today. He has not been the reliable receiving back the Eagles had hoped he would be this camp.

Six players appeared on one or the other kick return/coverage teams:

• I don’t think the Browns are winning many games with Jacoby Brissett at quarterback, and a group of wide receivers that is comprised of Amari Cooper and not much else. Their passing attack is going to be horrendous.

Apparently, their win total over/under is currently at 8.5 wins. Bang that under all day.

• As noted above, the Eagles looked like the better team overall, bringing their joint practice record under Nick Sirianni it’s 3-0.

• Throughout training camp, I’ll have occasional one-on-one interviews with Eagles beat writers / other media folks while the players are stretching and doing other boring stuff, as well as our regular post-practice podcast recaps. Oh, and here’s the iTunes link. Review, subscribe, etc.

The predictions so far: